“All good books have one thing in common — they are truer than if they had really happened.”
—Ernest Hemingway

I’m a big fan of Lawrence Block and Stephen King, but there’s something these two fine writers say that sets my teeth on edge: They call fiction a “lie.”

Block has written a number of excellent books for writers, including Telling Lies for Fun & Profit (1981) and The Liar’s Bible (2011). (Despite the titles, I highly recommend them.) In Danse Macabre, Stephen King said, “Fiction is the truth inside the lie.” Clearly, King’s focus is on the truth, not the lie, because he goes on to say, “Morality is telling the truth as your heart knows it.”

Neil Gaiman once made a similar remark: “Stories may well be lies, but they are good lies that say true things, and which can sometimes pay the rent.” Khaled Hosseini, author of The Kite Runner, said, “Writing fiction is the act of weaving a series of lies to arrive at a greater truth.” And Kurt Vonnegut, in the preface to Mother Night, said, “Lies told for the sake of artistic effect … can be, in a higher sense, the most beguiling forms of truth.” And William Gibson (Neuromancer) writes, “The most common human act that writing a novel resembles is lying. The working novelist lies daily, very complexly, and at great length.”

Why would any practitioner of the art of fiction slander his art by calling it a “lie”? Granted, fiction is an account of events that didn’t actually happen — but does the nonfactual nature of fiction make it a “lie”?

The dictionary definition of a lie is “a false statement made with deliberate intent to deceive.” Fiction does not try to deceive anyone. The reader knows a novel or story is not a factual account, and approaches it in a state of (as Coleridge termed it) “willing suspension of disbelief.” Without intent to deceive, there is no lie.

Equating fiction to a lie is like equating surgery to a back-alley stabbing. After all, the surgeon cuts you open with a knife and takes your money. Isn’t that exactly what a mugger with a switchblade does? Well, no — the two acts are not even remotely similar.

“The basis of art is truth, both in matter and in mode,” said Flannery O’Connor. “The person who aims after art in his work aims after truth.” Great fiction can’t lie. Fiction, in order to function as entertainment, must be true. Sure, the reader knows it isn’t factually true — but the reader expects it to be true in a deeper way. As novelist Emma Donoghue has said, “Stories are a different kind of true.”

Orson Scott Card’s short story “Lost Boys” first appeared in the October 1989 issue of The Magazine of Fantasy and Science Fiction. Though the first-person protagonist of the story is named Step Fletcher, many aspects of Card’s own life are woven in the story. Card himself didn’t realize how much of his own personal truth, including his emotional pain, was woven into that work of fiction until some months after he had written it.

Much of the pain of that story centered on his son, Charlie Ben, who was severely afflicted with cerebral palsy (and who died more than a decade after the story was published). At the time he wrote the story, Card thought he was writing a simple ghost story featuring a fictional boy named Scotty. Instead, he had inadvertently told the truth about his repressed grief over his real-life son, Charlie Ben. In an afterword appended to the story for its initial publication, Card reflected:

In all the years of Charlie’s life … I had never shed a single tear for him, never allowed myself to grieve. I had worn a mask of calm and acceptance so convincing that I had believed it myself. But the lies we live will always be confessed in the stories that we tell, and I am no exception. The story that I had fancied was a mere lark, a dalliance in the quaint old ghost-story tradition, was the most personal, painful story of my career — and, unconsciously, I had confessed as much by making it by far the most autobiographical of all my works.

Great writers don’t lie — they reveal the truth through fiction (often, without realizing it). Their stories are morally, emotionally, humanly true. Great fiction is convincing. It touches a responsive chord of truth within our souls. Fiction must resonate with eternal and universal truths, or the reader will throw the book away in disgust.

Don’t lie to me. Tell me the truth. Tell me a story. 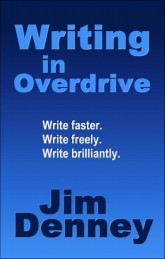 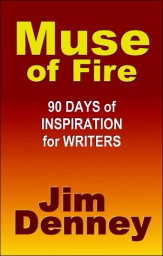 And for a 90-day supply of inspirational, motivational writing insight, read Muse of Fire: 90 Days of Inspiration for Writers by Jim Denney.

Jim Denney has written more than 100 books for a variety of publishers. He’s the author of the four-book Timebenders science fantasy series for young readers, and is a member of Science Fiction and Fantasy Writers of America (SFWA).